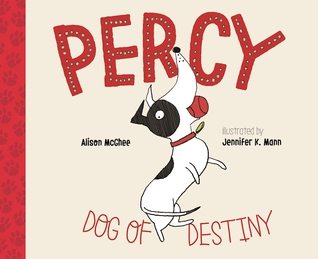 This small book packs a lot inside, just like it's protagonist, Percy. He may be a small dog (he looks like a Jack Russell to me, but I may projecting from my own experience), but he has tons of confidence and energy. With his special ball, his "little porkie pie," Percy heads to the dog park to meet up with his friends - "Make way world." Once he, Molly, Oatmeal Raisin Cookie, and Fluffy all arrive, the fun begins. They streak along the fence, except for Fluffy who rolls on his back. "Oh, Fluffy." When they sniff derrieres, Fluffy sniffs flowers. "Oh, Fluffy." You get the idea; Fluffy is a big lovable lug who doesn't seem quite bright. But when a taunting squirrel endangers the special ball, it is Fluffy who saves the day. "Oh, Fluffy!"

The spare text that accompanies most of the action gives way to longer phrases when Percy is really showing off his personality. When the squirrel taunts him, he gathers the others to teach it a lesson because, "Are we dogs, or are we doughnuts?" And when his ball goes sailing though the air away from him, he waxes positively eloquent: "Precious! Cupcake! Little porkie pie! Sweet poopsie muffin, come to papa!"

The illustrations work seamlessly with the text (as good picture books should), to tell the story. The actions of Percy, Molly, and Oatmeal Raisin Cookie in contrast to those of Fluffy will have readers laughing out loud and chiming in on the refrain of "Oh, Fluffy." Many young readers will also get the giggles over the dogs sniffing at each other or when it is time to "pee on the tree." (Let's face it, just reading the word pee out loud will cause a major outburst of laughter.) And Percy's gyrations as he tried to snatch his ball out of the air are my major reason for claiming he is a Jack Russell.

Together, the author and illustrator have created a character with plenty of personality and star power. Readers will be clamoring to hear more adventures starring Percy, Dog of Destiny!

I received a review copy from the publisher.
Posted by Suz Costner at 4:55 PM