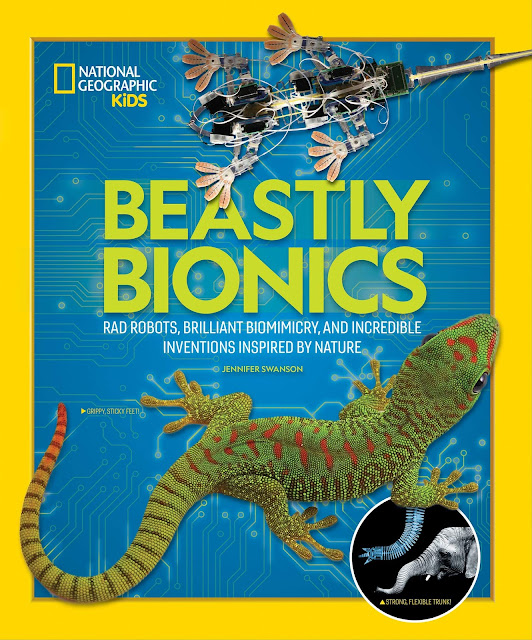 Are you interested in engineering inspired by nature? Is your curiosity aroused by terms like bionics, biomimetics, and biomimicry? Perhaps robots and  electronics capture your imagination? Then you need to check out this book. Written by Jennifer Swanson, author of awesome books such as Astronaut Aquanaut and  Save the Crash Test Dummies, this latest title delves deeply into the ways various problems and challenges are being conquered by carefully observing nature.

As the introduction explains, "Many different areas of study use bionics: architecture, transportation, energy, medicine, farming and even communication. Because nature has already solved some challenges humans face, it's the perfect place to find ways to help." These inspirations from nature are divided into four broad chapters of solutions, helpers, energy, and healers. Each individual topic is then presented with details about the animal, the dilemma, the technology, additions that designers added, an extra fact about the technology, and "a  fascinating fact about the awesome animal."

Along with the amazing breakthroughs in design and the in-depth look at the animal's abilities and how they are steering scientists into cutting edge research, there are also incredible images. Large scale photos of each animal accompany the information and smaller photos show the technology. As readers have come to expect from National Geographic, the images are crisp, clear, and colorful.

When the term bionics is used, many people think of "The Six Million Dollar Man" or perhaps exoskeletons like those worn by Tom Cruise and Emily Blunt in "Edge of Tomorrow." But designs based on nature can also be ways to increase the brightness of LED bulbs by studying fireflies, or creating waterproof bandages based on the mucus of slugs. Sure, there are incredible replacement limbs and hearing aids, but there is so much more. The "One Creature: Many Creations" sections feature animals like spiders and geckos who have inspired several different inventions.

Besides the incredible text and illustrations, the usual nonfiction features - table of contents, glossary, index - help readers locate the information they need or want...... "Find Out More" offers a list of related books and websites. This book is perfect for young readers interested in STEM, as well as for use with science classes and robotics clubs.
Posted by Suz Costner at 12:38 PM No comments: 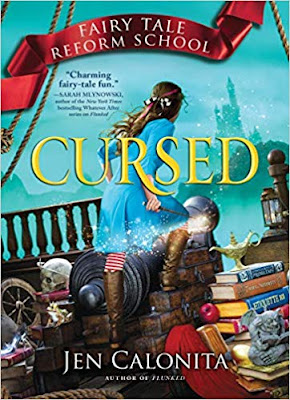 When I try to describe the books in the FTRS series, I sometimes feel as if I am just riffing on the trailers for "The Princess Bride." Think about it - chases, escapes, giants, evil masterminds, sword fights...they have a lot in common. Of course, in Gilly's case, most of the people involved are students or teachers at the Fairy Tale Reform School.

In this climactic installment, we find Gilly and her friends trying to find the last of the ingredients that Rumpelstiltskin needs to complete his curse on Enchantasia. Along the way they suffer "through dangers untold and hardships unnumbered" just as Sarah describes her quest in "Labyrinth." Despite evil wishes used against them, a cranky Kraken, fireballs, a wyvern and everything else the Stiltskin Squad can throw at them, the students don't give up.

Anna, Gilly's younger sister, is still working with Stiltskin and Alva. Will Gilly have to sacrifice the sister she loves to save everyone else? And will she and her friends make it through the final battle in one piece? Throughout the series friendship has been an important factor in the success of the characters. As Maxine writes in her essay, "We keep each other in check...when you have your friends by your side, the future doesn't feel so grim."

Fans will not be disappointed in the showdown to decide the fate of the kingdom once and for all. There is plenty of action, humor, some self-reflection, and resolution. You don't want to miss it.

Highly recommended for middle grades and up. I read an e-book provided by the publisher for review purposes.
Posted by Suz Costner at 6:00 PM No comments: 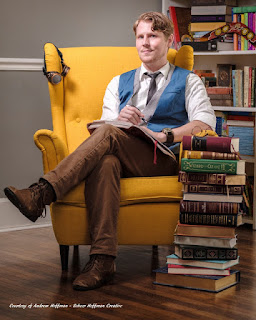 B. A. Williamson is the author of The Marvelous Adventures of Gwendolyn Gray and The Fantastical Exploits of Gwendolyn Gray. When not mining the unfathomable depths of consciousness for new words to sling, he can be found wandering Indianapolis, directing plays, child taming, and probably singing entirely too loud. Please direct all complaints and your darkest secrets to @bawrites or gwendolyngray.com.

After weeks of "distance education," we all feel like we've been stuck staring into a lambent since spring break. To help us escape into an incredible world of danger and adventure, Mr. Williamson was kind enough to answer some questions for me about his writing choices and Gwendolyn's latest literary outing.

For further information, you should visit his website (as he recommends above). He has even created soundtracks for both books, with links to both the YouTube and Spotify versions, "with each track cued to a specific quote in the book." And now... on to talking with the author himself!

-  Why did you choose to make your main character a girl?

At the time, my wife was pregnant, and I wanted a story I could read aloud to a baby girl (which turned out to be a boy.) So I came up with the kind of female role model I wanted a daughter to have.


-  Did you always plan to make Gwendolyn's story a series?


Sort of. The first book came out REALLY long, and a large chunk of it became the foundation of the second book. But I always had it in the back of my head that there were plenty of worlds she could travel to and have adventures on.


-  And do you have an idea of how many more adventures she may have?


I'll keep writing as long as people keep reading. The first two books are really a series to themselves. I'm working on another two which take a different direction, and as Gwendolyn gets older they become more YA than middle grade. She ages right along with her readers..


-  In the first book, The Marvelous Adventures of Gwendolyn Gray, Gwen visits a steampunk type world. This time she winds up in the faerie court. Do those two settings have any special significance to you? Why did you choose them?


When I first came up with the story, I had grand artistic notions of an inspiring hero with a big imagination in a world that didn't want her. And then I decided, "I like steampunk. There will be steampunk. And airship pirates." And that's been a large part of the series--in a story about stories, I just throw in everything I love from various stories. When I looked at what genre of story she would travel into in book two, it had to be fantasy, especially given the fairy-tale-esque tone of the books. Gwendolyn had to learn to control her powers, and who better to teach her to use them than fairies? And they're SO much fun to write.


-  The Library of All Wonder is awesome. Was it based on, or an homage to, a particular library from your own life?


I've always loved stories with magical libraries. The library at Unseen University in Discworld, the library of dreams in the Sandman comics, the movie Pagemaster, and even Beauty and the Beast would all be inspirations. I spent a lot of time in libraries as a kid. I also had the chance to visit the Bodleian Library at Oxford, which they used to film the library scenes in Harry Potter. That was pretty in spring.


-  If you were to visit the Library, what book would you be most excited to find? Or would you prefer to visit Cyria and have her invent something for you? What would it be?


I love Cyria so much, I think I'd like to tour her library with her. Of course I'd be visting the fantasy and sci-fi sections. Mostly, I want to see what the comic book section of the Library of All Wonder looks like. I think I'd be too nervous to look at my own life story, though.


-  One dramatic confrontation reminds me of Meg facing It in A Wrinkle in Time. Have any of your readers found scenes that remind them of other favorite books?


Yes! A Wrinkle in Time was definitely another inspiration. The Chronicles of Gwendolyn Gray may as well be a giant blender for every story I've ever loved. What's most interesting is when people find parallels to books I hadn't read when I wrote mine, (though I went and read them later.) The Golden Compass was one. The book Momo by Michael Ende came up a lot. He wrote Neverending Story, one of my absolute favorites, but I had never heard of Momo. It's the story of a special girl who battles men in bowler hats that are turning the world dull and boring. Who knew?


-  How long did it take you to become a published writer?


I started this book in 2012, and it was my first project that I seriously intended to get published. I got a request for the manuscript from Jolly Fish Press sometime in 2016, and signed a contract with them a few months after that.


-  Does your work as a middle school teacher influence your writing? Obviously you know how to write characters in that age range, but do you get specific ideas from your classroom, or do you ever have your students read and respond to something you are writing?


Absolutely. I'm always watching students to see how they talk, how they interact with each other. I use bits of different kids' personalities to make my characters feel real. And I read the books out loud as part of my teaching. First off, what better story to use to teach reading and writing skills? And it lets me see what parts make them gasp, or cry, or fall asleep. But now that I'm working on book three, there's too much to read to them! So I rely on a few "alumni" who still ask for chapters, and they help me out.

An enormous thank-you to B.A. for answering these questions and to the lovely folks at Jolly Fish Press for allowing us to be part of the awareness tour.

I have posted previously about both books. To see those posts, just click the links below. B.A. Williamson also has a YouTube channel - so don't miss it!

"Instead of ultra-realism, show the kind of preteens that kids wish they were, but with the kind of struggles they already have. That’s when you can show the magic of this particular age group. They’re just starting to realize that there’s a whole world around them, full of other people with their own thoughts and feelings. They learn that the things they do matter. There’s a whole new version of themselves that they haven’t met yet, and they’re just learning how to shape themselves into that person."