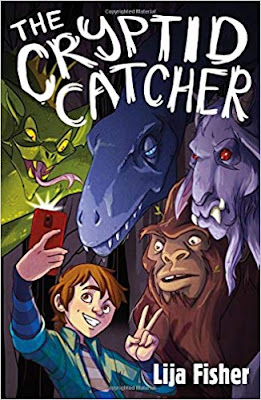 First in Lija Fisher's series, The Cryptid Catcher tells the story of Clivo Wren and his amazing discovery that his father was not an eccentric archaeologist, but actually traveled around the world searching for cryptid creatures such as the Yeti. It's all a bit hard to take in, especially since his father never told him about his quest to find legendary creatures and now his father has died while away on another trip. Should Clivo believe the grouchy man who turns up at the front door and tries to send him out to finish his father's mission?

Zany characters lend the book even more energy than a hunt for the Loch Ness Monster would have on its own. There are the grumpy Douglas Chancery, flighty Aunt Pearl and her cats, the Myth Blasters - a group of teens who collect information to help pinpoint the location of various cryptids (although they don't go out looking for the creatures), and even sinister agents from Luxembourg. There are also plenty of opportunities to laugh. For instance, when he believes that an enemy agent is following him, Clivo thinks, "running before he was even in official danger didn't seem to be the bravest choice. Smartest, yes. Bravest, no."

Clivo's efforts to deal with the loss of his father (and earlier loss of his mother) have to take the backseat to the quest, but the feelings and doubts keep popping up. He frequently wonders why his parents lied to him about his father's occupation. Was it because they didn't trust him, or were they trying to keep him safe? As one of the other characters tells him, "...parents. None of them have a clue about what they're doing. and most of them flat-out stink at it. But at the end of the day, they're just trying to do their best."

Another plus is how the author makes sure to show that Clivo is not good at everything, and in fact is in remedial math classes (although he can speak 5 languages). His friend Stephanie tells him, "There are many ways to be smart, Clivo. I may be good at computers, but put me on a volleyball court and I'm dumb as a stump. Sometimes it just takes time to find out what you're good at." The kids in the story have various strengths and personality quirks, and represent some of those many ways to be smart.

A perfect middle grade novel for kids who enjoy adventure, humor, and don't mind some fantasy elements such as legendary creatures mixed in. Fans of The Imaginary Veterinary books will feel right at home with this new series.

Visit https://www.curiouscitydpw.com/2019/01/23/cryptozoology-research-game/ to find out about the research game based on the book. 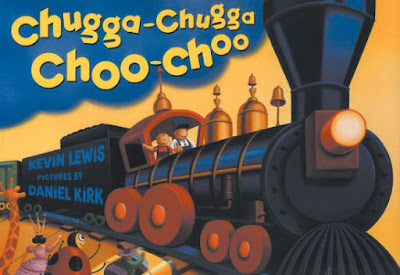 I picked this up for my nephew at the Children's Festival of Reading this summer. As I was wrapping it for Christmas, I flipped back through it and realized I had never posted about it. The rhyming text tells of a train and its journey with a repeated refrain that even the very young can anticipate. Author Kevin Lewis was an entertaining speaker at the festival and had the crowd joining in with a "Whoooooooo! Whoooooooo!" each time it appeared in the text. 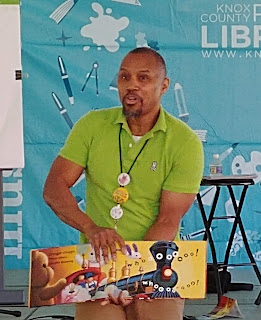 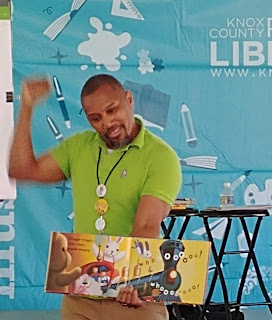 Illustrator Daniel Kirk, of Library Mouse fame, chose to interpret the action as that of a toy train taking place in a child's bedroom rather than a full-size train out in the city. Because of that choice, readers see scenes such as a train crossing a row of building blocks over the aquarium when the story says, "Across the river swift and wide. A bridge goes to the other side." The entire book feels like a visit to the world of "Toy Story," with action figures and dolls helping to load the train or watching it roll past.

Fun for ages 2 and up, especially those who have their own favorite train or who enjoy rhyming stories that allow readers to chime in. Available in picture book and board book formats.

Fall Reading 2019 Sleep: How Nature Gets Its Rest 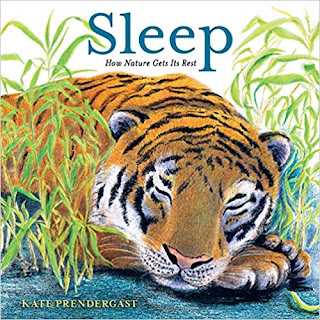 This comparison of the various ways and places that animals sleep is a perfect bedtime book. Mixed media illustrations show a dog and cat snoozing on a rag rug, a harvest mouse in her nest, and penguins on the ice. Readers learn that rhinos sleep alone, while meerkats sleep in a heap. The added touch of having the text printed upside down just like the sleeping sloth will amuse readers, although they may wonder why the words are not printed the same way on the page about bats. Juxtaposing the hibernating bears with the ants sleeping "only a few minutes at a time" is another eye-catching spread. Back matter offers more facts about the various animals which could not be included on the main pages with their single sentences.

After seeing all the sleeping animals, it will be hard for youngsters not to start yawning and thinking of their own comfy beds.

Posted by Suz Costner at 6:16 PM No comments: 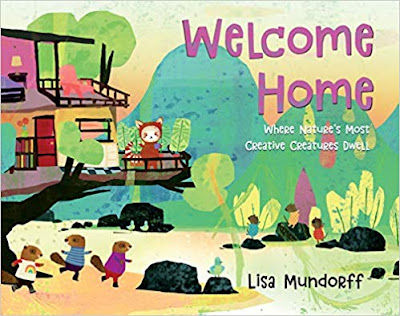 Quirky illustrations accompany simple text to introduce the names of various animal homes. Two spreads are used for each animal. The first pairs a single sentence and an illustration of the natural dwelling, then a second spread pictures the animal in a human home of the same name. For instance, beavers are shown entering and exiting their watery lodge; then they are shown lounging around a ski lodge and enjoying winter sports on the slopes of the resort. Other animals in the book include otters, lions, pigs, red pandas, dolphins, pigeons, and prairie dogs.

The balance of fact and fancy makes this a fun read for children and adults, and the scenes of the animals in human homes offer plenty of details to capture attention and stimulate discussion. This could be a read-aloud to enjoy at home, or used as part of a classroom unit on animals and animal homes. Either way, readers will learn a bit about nature and have a good time doing so. This is Lisa Mundorff's debut as a picture book author.

Posted by Suz Costner at 2:08 PM No comments: 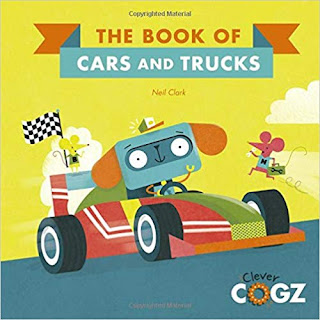 Clever Cogz is a robotic dog who loves to explore machines with his sidekicks, Nutty and Bolt. In The Book of Cars and Trucks, the friends learn all about the various parts of cars and trucks - wheels, tires, engines, etc. Detailed diagrams label each part and explain its function. There are also facts about the first car race, the fastest car (763 m.p.h.), campers, trucks, and fire engines. The final page has six questions to check on how much readers have learned. 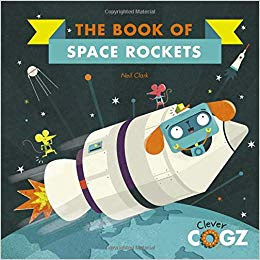 In The Book of Space Rockets, Cogz and his buddies learn about rockets - design, flight, and fuel; and various spacecraft from the lunar module to space stations. Diagrams point out fuel tanks and payload on a rocket,  as well as the laser and robotic arm on the Mars Rover. Milestones such as the Sputnik 1, the Hubble Telescope, and the Apollo 11 are featured. There are also review questions on the final page.

All the books in the series include humor as the characters satisfy their curiosity. For instance, Nutty is disappointed to learn the moon is made of rocks and metals. "What?! No Cheese?!" exclaims the little mouse. Bolt enjoys trying out some of the vegetables from the space station's garden. And Cogz makes puns like "That's wheely clever!" when talking about how wheels allow cars to move easily.

Perfect for early elementary readers who share a fascination with transportation and gadgets.
Posted by Suz Costner at 1:39 PM No comments: 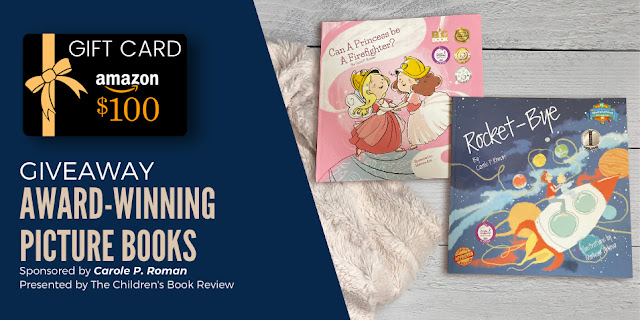 GIVEAWAY
Enter for a chance to win two of Carole P. Roman’s award-winning picture books, plus a $100 gift card!
One (1) grand prize winner receives:
Three (3) winners receive:
Giveaway begins November 27, 2019, at 12:01 AM PST and ends December 19, 2019, at 11:59 PM PST.
Open to legal residents of the 50 United States and the District of Columbia, who are eighteen years of age or older in their state or territory of residence at the time of entry. Void where prohibited by law.
Carole P. Roman is responsible for prize fulfillment.
ABOUT THE BOOKS 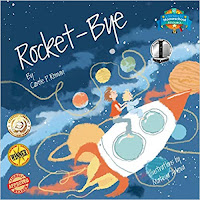 Written by Carole P. Roman
Illustrated by Mateya Arkova
Carole P. Roman travels to the stars, orbiting the moon and rocketing past planets in this delightful journey to the far reaches of the galaxy. A beautiful bedtime poem, this verse is sure to delight any child before they go to sleep.
“Just as the text and illustrations gently curve and sweep across the pages, so do the calming and effortless rhymes in what could be Carole P. Roman’s finest book yet. “—The Children’s Book Review
Ages 3-7 | Publisher: CreateSpace Independent Publishing Platform | 2016 | 978-1530243372
Available Here: https://amzn.to/1WfDoZF

Can a Princess Be a Firefighter? 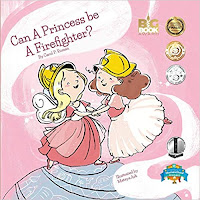 Written by Carole P. Roman
Illustrated by Mateya Arkova
Two little girls pepper their father with questions about whether or not they can be a profession and still be a princess. Motivated by her granddaughter’s fascination with all things ‘princess,’ Carole P. Roman penned this adorable poem celebrating all the wonderful possibilities waiting ahead for them.
“Can a Princess Be a Firefighter? is an important must-read for both girls and boys.”—The Children’s Book Review
Ages 3-7 | Publisher: CreateSpace Independent Publishing Platform | 2016 | 978-1530243372
Available Here: https://amzn.to/2rcUO37
ABOUT THE AUTHOR 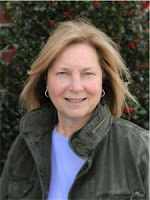 
The Fairview Review is participating in this blog tour in partnership with The Children’s Book Review and Carole P. Roman.
Posted by Suz Costner at 9:00 PM 1 comment: