Enter for a chance to win a copy of Kid Lit: An Introduction to Literary Criticism! 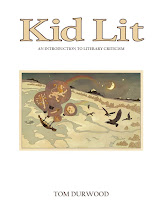 Publisher’s Synopsis: We are surrounded by narratives, in fiction and in our everyday lives. In this colorful collection of ideas, the author argues that understanding the components of our favorite children’s stories can lead to a lifetime of critical thinking.

Of value to all teachers, students, librarians, readers, literature lovers, and moviegoers.

“Tom Durwood is the best English instructor I have seen in my thirty-two years of teaching.” —Professor Patrick Murray, Valley Forge Military College

Tom Durwood is a teacher, writer and editor with an interest in history.  Tom most recently taught English Composition and Empire and Literature at Valley Forge Military College, where he won the Teacher of the Year Award five times. Tom has taught Public Speaking and Basic Communications as a guest lecturer for the Naval Special Warfare Development Group at the Dam’s Neck Annex of the Naval War College.

Tom is editor of an online scholarly journal, The Journal of Empire Studies (www.empirestudies.org). Peter Suber, Berkman Fellow at Harvard University, an advocate of the open access movement, praises the journal as “a new opportunity for overcoming access barriers to knowledge and research.”  Dr. Julian Fisher of Scholarly Exchange has also applauded Tom’s efforts. “Creating valuable academic content and then hiding it behind financial firewalls – the traditional scholarly publishing model – runs counter to the essence of scholarship, learning and sharing,” according to Fisher. “To see a journal such as the Journal of Empire Studies breaking that mold is exciting.”

Tom’s newspaper column “Shelter” appeared in the North County Times for seven years. Tom earned a Masters in English Literature in San Diego, where he also served as Executive Director of San Diego Habitat for Humanity. Tom earned his undergraduate degree from Harvard, where he edited an undergraduate arts journal and studied with David McClelland (Roots of Consciousness).

Kid Lit offers students and teachers guidance in analyzing and discussing children's and young adult literature. The book falls into three main sections: the Lit Crit Toolbox, In Depth studies, and Lesson Plans. The Toolbox introduces (or refamiliarizes) readers with the basics of the coming of age story, the three-act structure of many books and films, and issues that may arise in literature such as gender, class, war, trauma, and empire. The section of in-depth studies looks at essays by various scholars on such wide-ranging topics as portrayals of government in the Star Wars saga or  gender roles in Pixar films. Besides an overview of the essay topics, there is also an interview with each scholar that offers further insight into their essays. The lesson plans are those used by the author in his own classroom and can be used as they are, or as examples for others to build their own activities.

One of the most attractive parts of this text is the use of popular culture as a source of discussion. Ranging from Kipling’s Jungle Book to “Black Panther” and all points in between, the author and the guest scholars point out multiple examples from stories of different genres and time periods to illustrate their points. Language arts teachers can use this to engage students in an exploration of themes and literary elements, either as a teacher’s manual or as a textbook for older students.

The Fairview Review is participating in the virtual tour in partnership with The Children’s Book Review and Tom Durwood. 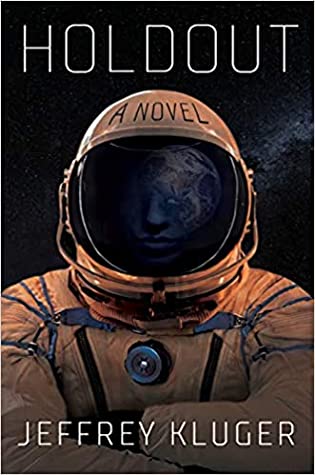 Readers who enjoy stories such as The Martian or "Gravity" in which astronauts are fighting against the odds for survival will find a similar appeal in Holdout. When the ISS is damaged and the crew has to evacuate, Walli Beckwith chooses to remain on board to call attention to a problem back on Earth. Within the affected area in South America is Walli's niece Sonia, working with an international group of doctors. The story alternates between the scenes with Walli, those with Sonia, and the authorities on Earth who are trying to persuade/order/strong arm Walli into boarding the vessel to return to the planet.

Besides the wonderful technical details of how the ISS and ground control function, there are also plenty of scenes showing the politics of Washington, as well as the heartbreaking effects of deforestation and tribal displacement by unscrupulous governments. There is danger, intrigue, humor, political wheeling and dealing, a massive social media and protest campaign, and loads of affection between friends and family. For those who enjoy space based adventures, strong female protagonists, or stories with an environmental and social conscience, this is a great read.

Publication is scheduled for August 3, so you don't have long to wait!

Posted by Suz Costner at 4:45 PM No comments:

Summer Reading 2021 The Case of the Murderous Dr. Cream 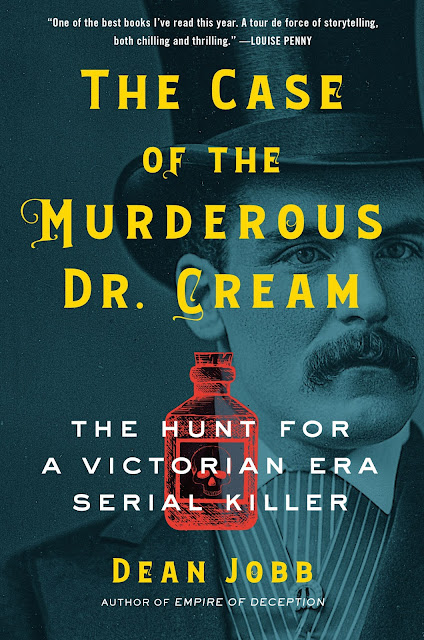 I enjoy mysteries, but I don't normally choose true crime books. I prefer my villains to be imaginary. But the description of this book and its subject - a killer who seems to have been a bit of a Jekyll and Hyde and as deadly as Jack the Ripper - was intriguing. Why had I never heard of this case until now?

Dr. Cream was a criminal who managed to divert suspicion through a variety of means. He also spread his crimes over 3 countries and multiple cities so that authorities had a hard time linking them all together. The amazing amount of travel and cross referencing that the detective of Scotland Yard had to do seems nearly impossible in a time when there were no airlines, Internet, or modern forensic amenities.

The author does an incredible job of telling the story of Cream, his victims, his pursuers, his trials (yes, plural), and final fate. The list of sources is extensive and the book includes archival images of people and places. He also explains the means of each murder and the methods used to identify each one by the police and experts like toxicologists of the day.

Anyone looking for a true crime book should check out the tale of Dr. Cream, due to hit shelves on July 13th.

Summer Reading 2021 The Leaf Detective: How Margaret Lowman Uncovered Secrets in the Rainforest 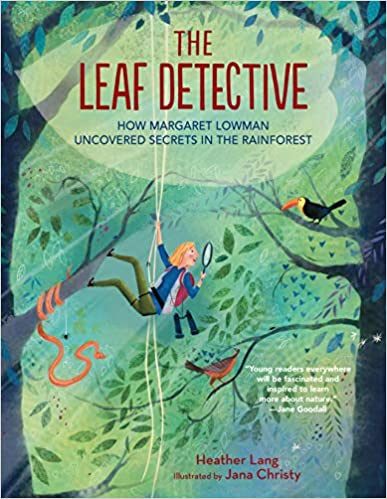 Meg was always interested in leaves. "She built tree forts, collected twigs, leaves and wildflowers to study and identify, to press and label." The narrative of the book traces her passion for science from those childhood adventures to her graduate studies in the rainforests of Australia. Her ingenious solution to reaching the upper canopies opened "a new frontier - mysterious and unexplored." Illustrations show scenes of life over one hundred feet above the ground, as well as naysayers on the ground waving their arms and saying, "Women don't climb trees." The book also shows the canopy walkway designed by Meg and her friend Peter O'Reilly, which can be used by tourists to visit the canopy. Details of threats to the rainforest and how canopy tourism can support economic growth in areas that have previously suffered from clearcutting for timber or farmland.

Several features provide helpful details. Additional facts are shared in leaf shapes in the corners of various pages. Quotes from Meg are shown in a different color of font from the main text to help them stand out.  An author's note includes photos of Heather Lang trying out the tree climbing harness Meg invented, as well as a photo of both women in the Amazon canopy in Peru. There is also a spread which shows the layers of the rainforest with descriptions of each layer and examples of the life found there. And a bibliography includes video references and the URL for Meg's website - both of which may prove useful for readers to explore on their own.

A great title for those who enjoy picture book biographies or stories of women in STEM careers. 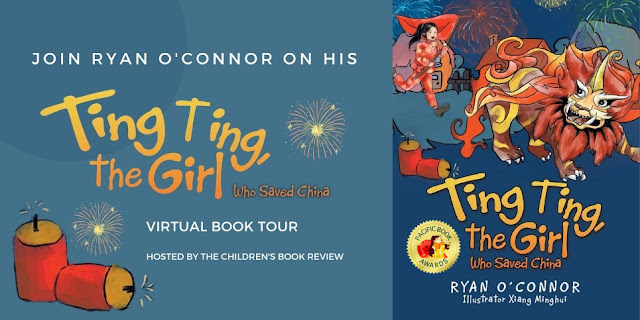 Enter for a chance to win a set of books by Ryan O’Connor, including Ting Ting, the Girl Who Saved China! 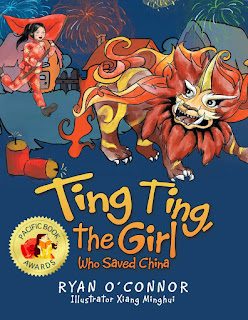 Publisher’s Synopsis: Li Li Wang is enjoying Chinese New Year with her family when her grandparents ask her to sit with them. Before giving Li Li her holiday gift, they tell her the story of Ting Ting Wang, Li Li’s ancestor, and how she became a Chinese hero. Li Li carefully listens as her grandparents tell her about Ting Ting, the monster Nian, and the origin of the Chinese New Year celebration. Ting Ting, the Girl Who Saved China provides insight into China’s biggest holiday, gives a sense of its culture, and shows that girls are just as strong and brave as boys.

Ryan O’Connor has lived and taught in Shanghai for the past ten years and his love of Chinese culture has inspired him to write the story of Ting Ting. He uses a family New Year’s celebration to frame the story. Li Li Wang is a six-year-old who is spending the evening with her parents and grandparents as they wait for midnight and the new year. Her grandparents decide to tell her the story of how their ancestor Ting Ting Wang saved China and how the traditions of the New Year’s celebration are based on her actions.

Readers who have never encountered Chinese New Year before will learn about several traditions - wearing red clothing, setting off fireworks, giving children red envelopes with money in them, sharing jiaozi (dumplings) after midnight, and hiding a lucky coin in one dumpling for someone to find. A comparison of which traditions are similar to their own family's celebration of the New Year's holiday could be an interesting discussion.

Families looking for stories that feature strong female protagonists will appreciate that Ting Ting is able to succeed in defeating the terrible Nian monster when all the bravest Chinese warriors are not able to do so. Those interested in cultural celebrations can compare their own family traditions with those of Li Li’s family. And those who enjoy stories that show warm family relationships will be pleased with the love and humor shared between the multiple generations of the Wang family.

Ryan O’Connor is a literature and writing teacher in Shanghai, China, and the author of the children’s book series Bobby the Bear. With a background in sports journalism and education, Ryan has turned his focus to writing children’s books. Through unique characters, Ryan provides children with moral and life lessons. Ryan has earned a bachelor’s degree in journalism and a master’s degree in education; he has also won numerous awards for sports writing. Ryan is a native of Pittsburg, Kansas, but has spent the past ten years living in Shanghai.

To learn more about Ryan and his books, visit his website at www.ryanoconnorauthor.com.

The Fairview Review is participating in the virtual tour in partnership with The Children’s Book Review and Ryan O’Connor.