Jack is your average 15-year-old boy living in a small town. He goes to school, likes a few of his teachers (and has one who seems to be his mortal enemy), spends most of his free time playing video games, and has a crush on the cutest girl in his class. Little does Jack know, everything is about to change. Aliens known as Deathlords have been traveling through the galaxy and destroying any signs of life they encounter - think of it as an evil Prime Directive. When Jack and his crush, Anna, are attacked by the aliens, Jack's destiny is altered. Now his video game skills may just help them stay alive, and his favorite science teacher's discussions of quantum physics are getting some applications IRL. Between school detention, Planetkiller UFOs, hyperspace travel, and an artifact buried at the core of the Earth, Jack will have to leave his slacker lifestyle behind if he wants to survive.

As I read I kept noticing dialogue and situations that reminded me of The Last Starfighter, Star Wars, and other sci-fi movies. According to the author, there are many of these Easter eggs hidden away in the story. Readers with a strong background in classic science-fiction films will come across many references that will be familiar. Jack is a fairly typical teenage male letting his hormones do his thinking much of the time, but he also pulls off some awesome moves.  He is a character that readers will enjoy cheering for even as they are shaking their heads over some of his decisions.

I read an e-book provided by the publisher through NetGalley. The book was released April 11, 2014. 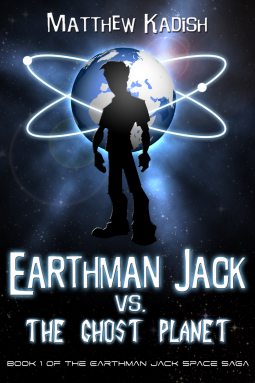 The author has created a list of Book Highlights for interested fans. An author bio has also been provided. Keep an eye out for Jack's second adventure coming out late in 2014, Earthman Jack vs. the Secret Army. There is also an interview with the author that you can watch.
Posted by Suz Costner at 2:49 PM