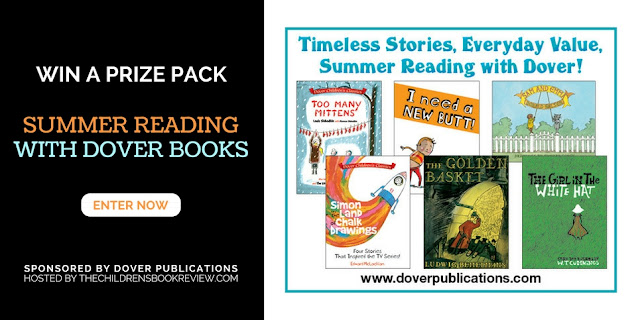 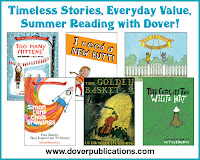 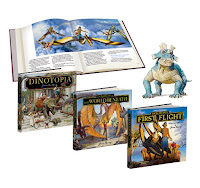 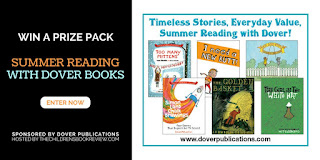 The Girl in the White Hat
Written by W. T. Cummings

Publisher's Synopsis: While Grandmother's asleep, Annabelle creeps out of her room and up the stairs to the dark and mysterious attic. Among the jumble of curious items packed away in the gloom is a big white hat with a floppy brim. Annabelle can't resist trying it on and thinks, "If I were a bird and this hat were my wings, I could fly. I wish I could fly!" And she does! New hardcover edition.

About the Author: W. T. Cummings (1933–2009) wrote and illustrated four remarkable picture books, of which The Girl in the White Hat was the first. A painter of note, he received a Master of Fine Arts degree from Yale University in 1962. Lauded by The New York Times as one of the ten best children's books of 1959, this now-rare volume is available in a lovely new hardcover edition, ready to charm a new generation of readers and imaginative hat-wearers.
Available Here: www.doverpublications.com/summerreading

Too Many Mittens
By Louis Slobodkin and Florence Slobodkin

Publisher's Synopsis: A beautifully illustrated single-volume edition of three classic children's tales: A wintertime tale of lost and found, Too Many Mittens finds the twins Ned and Donny in Grandma's care while Mother and Father are off on a trip. Word gets around when Donny loses a mitten, and soon everyone — teacher, postman, milkman, grocer — is finding lost mittens and delivering them to the twins' house, until Grandma has a great idea. In A Good Place to Hide, Susan wants to get away from her persistent brothers, who are determined to show her the spider they've trapped in a jar. But everywhere she goes, from the tool shed to Rover's doghouse, someone finds her — until she finds a secret place where she finally can be alone. Everyone knows that mermaids have long golden hair and sweet singing voices — except when they don't! In The Little Mermaid Who Could Not Sing, red-haired Cynthia can swim and ride seahorses but she cannot sing a note. Cynthia's terribly discouraged until she discovers that she has a hidden talent of her very own.

About Louis Slobodkin and Florence Slobodkin: At the age of 15, Louis Slobodkin (1903–75) entered the Beaux Arts Institute of Design, where he studied drawing, composition, and sculpture. In the course of his six-year studies, he won more than 20 medals and was awarded the Louis Tiffany Fellowship. Slobodkin illustrated nearly 90 books, 50 of which he wrote, and in 1944 he received the Caldecott Medal for his illustrations for James Thurber's Many Moons
Poet and author of children's books Florence Slobodkin (1905–94) collaborated with her husband on five books, including the classic Too Many Mittens.
Available Here: www.doverpublications.com/summerreading

The Golden Basket
By Ludwig Bemelmans

Publisher's Synopsis: On a cobblestoned street in the ancient city of Bruges, a hotel with a golden basket on its roof admits a trio of weary travelers: a father and two little girls, Celeste and Melisande. The next morning, the sisters awake to the thrill of discovering a new country and meeting new friends, including Jan, the innkeeper's son, and Monsieur Carnewal, the hardworking, warmhearted maître d'hôtel. The girls discover a world of imaginative fun within the hotel itself as well as in the picturesque city of medieval buildings and towers, where graceful swans swim in the canals and a lamplighter makes his daily rounds. Inspired by a trip to Belgium, author Ludwig Bemelmans drew upon his youthful experiences at his family's Austrian inn to perfectly recapture the setting of an Old World hotel. A brief cameo by a mischievous French schoolgirl — the first appearance of the author's iconic character, Madeline—offers a hint of the joys to come.

About Ludwig Bemelmans: The recipient of both the Caldecott and Newbery awards, Ludwig Bemelmans (1898–1962) is best remembered as the creator of the Madeline books. He grew up in Austria, emigrated to America in his youth, and became a U.S. citizen after serving in World War I. In addition to dozens of books for adults as well as children, Bemelmans wrote movie scripts and was an internationally renowned gourmet.
Available Here: www.doverpublications.com/summerreading

Simon in the Land of Chalk Drawings
By Edward McLachlan

Publisher's Synopsis: Simon enters the Land of Chalk Drawings, where his doodles spring to colorful life and join him in adventures that challenge his wits as well as his imagination. This exclusive collection comprises all four of author Edward McLachlan's Chalk stories, which served as the inspiration for the popular PBS and Nickelodeon animated shorts. In the Land of Chalk Drawings: An unfinished stick figure asks to be completed and introduces Simon to a host of other drawings that need his attention. Simon and the Chalk Drawing Army: Some soldiers have invaded the Land of Chalk Drawings and are making everyone drill to the point of exhaustion. With quick thinking, Simon finds a way to keep the soldiers busy, and the other drawings get a treat. Simon and the Moon Rocket: Simon flies to the moon, where he's forced to solve a mountain of sums. How can he finish them all and get away? Simon and the Dinosaur: All the children and animals have disappeared from the Land of Chalk Drawings ― they've been eaten by a dinosaur! Simon must rescue them and help the hungry dinosaur, too.
About Edward McLachlan: Hailed as "the cartoonist's cartoonist," Edward McLachlan has contributed cartoons to Punch, Private Eye, the London Evening Standard, New Statesman, Playboy, and many other periodicals. He has also worked for several book publishers, has drawn advertisements, and has designed and written more than 300 commercial advertising films for clients including Renault and Alka-Seltzer.
Available Here: www.doverpublications.com/summerreading

Sam and Emma
By Donald Nelsen and Edward Gorey

Publisher's Synopsis: A kind hound and a critical cat venture beyond their garden gate for a look at how other animals live in this winsome tale, which is charmingly illustrated by Edward Gorey. Emma the cat scorns the lunch offered by a trio of friendly beavers and laughs in the faces of a pair of porcupines, much to Sam the dog's consternation. Along come a couple of raccoons. Emma allows that they resemble cats, so they're not ugly, but decries their nocturnal habits. "Not even a dog would live like that," she declares — and now she's insulted long-suffering Sam, too. She didn't mean him, of course. Sam offers his feline friend a more balanced perspective and a gently irresistible appeal for tolerance, bringing this thought-provoking fable of friendship to a warm conclusion. Hardcover edition.

About Donald Nelsen and Edward Gorey: Indiana native Donald Nelsen has lived and worked in New York City for more than 50 years. In 1959 he was awarded a Fulbright grant to study painting in Paris, and upon his return to the United States he joined a design studio and began creating textile and wallpaper designs as well as painted wood carvings of everyday objects. Several of his oil paintings are on display at the Brooklyn Historical Society.
American author and artist Edward Gorey (1925–2000) combined whimsy and dark humor in such illustrated books as The Doubtful Guest, The Gashlycrumb Tinies, and four Amphigorey anthologies. His distinctive style, featuring characters in Victorian dress in surrealistic settings, achieved wide recognition with his opening-sequence animation for the PBS Mystery! series.
Available Here: www.doverpublications.com/summerreading

I Need a New Butt
By Dawn McMillan and Ross Kinnaird

Publisher's Synopsis: A young boy suddenly notices a big problem — his butt has a huge crack! So he sets off to find a new one. Will he choose an armor-plated butt? A rocket butt? A robot butt? Find out in this quirky tale of a tail, which features hilarious rhymes and delightful illustrations. Children and parents will love this book — no ifs, ands, or butts about it! "I can assure you right now that your kids will love this book. They will giggle, they will laugh, and they will want this book to be read over and over again because it is just plain silly and funny … the perfect kid-combo." — Storywraps

About Dawn McMillan and Ross Kinnaird: Dawn McMillan writes fiction, nonfiction, poetry, and storybooks for children. She is also the author of Woolly Wally and Holy Socks. She lives in Waiomu, New Zealand.
Ross Kinnaird has illustrated such children's books as 50 Body Questions and the animated poem "Smaller," winner of the People's Choice Award at the World Parkinson's Congress. He lives in Auckland, New Zealand.
Available Here: www.doverpublications.com/summerreading

The Fairview Review is promoting this giveaway in partnership with The Children’s Book Review and Dover Books.
Posted by Suz Costner at 9:00 PM