Winter Reading 2018 Marabel and the Book of Fate 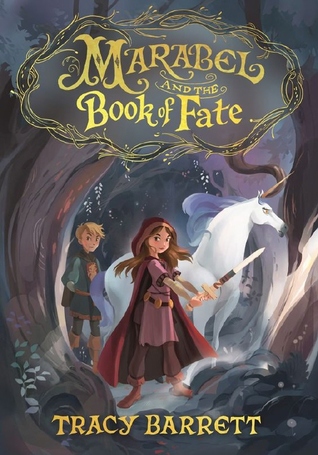 Imagine being a princess with a twin brother. Doesn't sound so bad, right? But what if your brother was the Chosen One and your parents treated you as an afterthought? That has been Marabel's life so far. But when her brother Marco is kidnapped from their 13th birthday celebration, Mara decides that she has to be the one to rescue him. It doesn't help that her father and the entire kingdom of Magikos depend on the Book of Fate to make all major decisions, or that the book is written in such archaic language that it must be interpreted by special priests and priestesses during a Consultation. When the court decides to sit and wait for the book's prophecy to come true, Mara takes matters into her own hands.

There are many fairy tale tropes present - the prince destined for greatness, the kingdom steeped in tradition, the neighboring kingdom filled with evil/magical creatures and ruled by an evil queen, a quest, a faithful friend, etc. But many of the elements are different than expected. The princess sets out to rescue the prince. Her trusty weapon is a wooden training sword. Her faithful sidekick is her maid. You get the idea. And there are some very obvious references to our world like a magical game called "Angry Phoenixes," a network called WizFi, and something called Flitter.

For middle grade readers who enjoy fantasy stories with danger, humor, friendship, loyalty, and problem-solving, this is an entertaining tale.

I read an e-book provided by the publisher through NetGalley.
Posted by Suz Costner at 7:01 PM