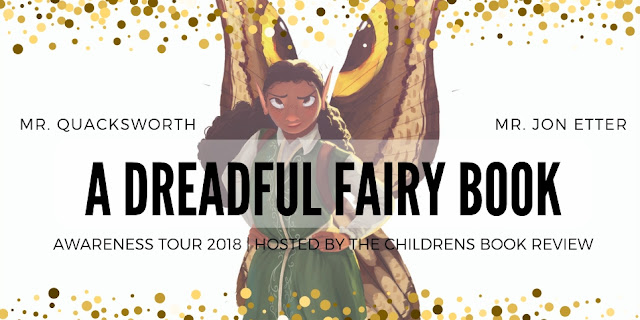 
Enter to win a copy of A Dreadful Fairy Book by Jon Etter!

A bound galley copy of A Dreadful Fairy Book

Giveaway open to residents of the fifty United States and the District of Columbia who are 13 and older.


If you have any difficulty with the Rafflecopter form, please use this link:
https://www.thechildrensbookreview.com/weblog/2018/11/a-dreadful-fairy-book-by-jon-etter-awareness-tour.html.


Publisher’s Synopsis: Shade the sprite is dreadful at being the perfect fairy. After her treehouse burns to the ground, Shade embarks on a quest, albeit with rather questionable companions, to find a place her outré self can finally fit in—a place of companionship and comfort and, most importantly, positively filled with books. When fantastic ruffians, swindlers, and a pack of ruthless Unseelie hunters threaten to halt her at every turn, can Shade survive the dreadful journey and find a destination she can truly call home?

If you were to take a narrator such as Lemony Snicket, add a protagonist with a chip on her shoulder, and then have other characters act in surprising ways - you would have a basic recipe for A Dreadful Fairy Book. Quentin Q. Quacksworth, Esq., our narrator, warns us from the start that "this story is quite dreadful" and "the fairies in this story are quite dreadful at being fairies." (Dreadful is a word which in this context means that they do not act as expected.)

Not to argue with a professional narrator, but the story was actually delightful. Yes, the characters often act contrary to the way in which their species are commonly portrayed, but that is a big part of the entertainment. Grumpy fairies, literary trolls, and squires who would rather try out new recipes than learn to fight are refreshing and offer plenty of opportunities to amuse and surprise us as we read.

So...this is the story of Lillyshadow Glitterdemalion, known as Shade to everyone who actually pays attention to her preferences. After losing her home and all her possessions, she sets out to fulfill her dream of finding a library. As she quests across distances she has only read about, Shade makes new friends and enemies, travelling with "the exact sort of confidence that usually gets people into profoundly deep trouble." Readers cannot help cheering for Shade's successes and fretting over her problems; there are plenty of dangers, villains, and unexpected allies to keep the action and suspense cranked up.

For those who love reading as much as Shade does, her frequent mention of books she has read will be a great source of amusement (a few times I even laughed out loud). Perhaps you have heard of Pride and Pixies, Meager Expectations, or To Murder an Insulting Finch? And the allusions aren't limited to cleverly disguised titles, they also appear as references to "Saint Eeyore (patron saint of lost causes)" or to "an old human in long gray robes and a funny hat poring over books about rings."

Whether you enjoy remixed fairy tales, humorous adventures, voyages of self-discovery, or stories that include lots of love for books of all sorts, you should disregard the narrator's opinion and read A Dreadful Fairy Book. And if you're not sure that any of those sorts of stories is right for you, perhaps you are rebellious enough to read and enjoy it simply because the narrator says you should not. Go on - you know you want to give it a try. 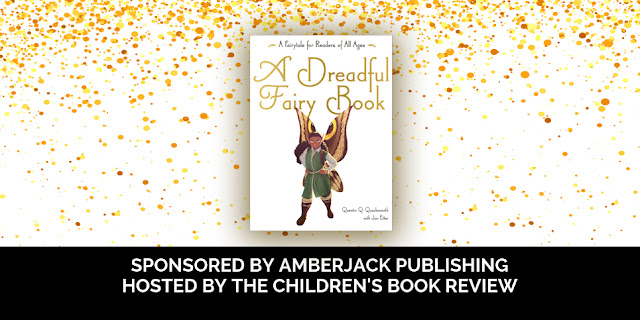 FTC Disclosure: The Fairview Review is participating in the blog tour in partnership with The Children’s Book Review and Amberjack Publishing.
Posted by Suz Costner at 9:00 PM