Fall Reading 2021 The Raven and the Pig 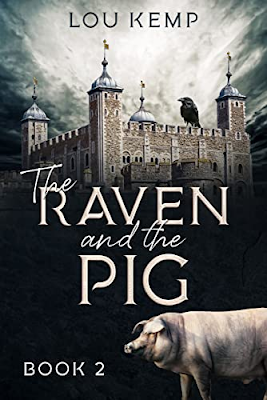 If you are looking for a book that takes you into a world of magic and fascinating characters, then open the pages of The Raven and the Pig. Don't be led astray by the unassuming title, this is not a book on animals. Instead, readers will encounter figures such as Captain Nemo and his ship Nautilus, author Jules Verne, magicians, witches, vampires, and other amazements. The adventure begins with one of the party lying near death and the rest determined to save him. Celwyn the magician is slipping away and only a legendary healer can restore him, so the group prepares to journey in search of the immortal Thales. But finding a way to save their friend is only part of the story. The group also must deliver an invitation to a mad magician, parlay with vampires, travel underground rivers, and complete their work on a marvelous new flying machine - all while avoiding thugs from the Mafioso and a centuries-old warlock.

The author has woven together existing characters such as Nemo, legends such as the ravens from the Tower of London, and the visitation of aliens to ancient Earth with new material to create an intriguing world. Could magicians be the descendants of aliens with powers (picture Ra from "Stargate" or demigods from "Percy Jackson")? Could Verne have written about things he actually saw, such as an incredible submarine? Along with all the fanciful elements, there are friendships, complicated sibling relationships, flirtations, descriptions of exotic ports of call and delicious meals. The skirmishes with their enemies show off various skills within the group - magical, tactical, and physical. And there are also hints of humor to offset the darker moments; Pelaez magically has a pig swimming the backstroke around the Nautilus and Celwyn decides to disguise a visiting scientist as a floozy in a floppy wig among other things.

There are many other bits of history and literature worked into the story; the Silk Road, Atlantis, the use of diving suits and sonar on the Nautilus, and the suggestion that once flying machines have been perfected the next step will be trips to the moon. Dryden's poetry and Shakespeare are referred to, and Verne seems particularly jealous that another character is reading the work of Lewis Carroll.

The story of Celwyn began with The Violins Played before Junstan and Music Shall Untune the Sky, and several more books are forthcoming. Part historical fiction, part magical mystery, and part steampunk - this series has something to offer readers of all sorts.