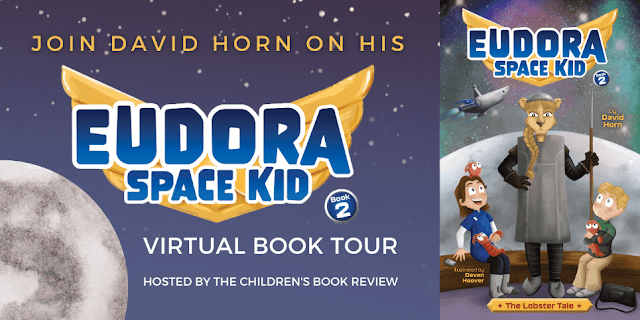 Enter for a chance to win a signed copy of Eudora Space Kid: The Lobster Tale and a $50 Barnes & Noble gift card!

A signed copy of  Eudora Space Kid: The Lobster Tale and a $50 Barnes & Noble gift card.

A signed copy of Eudora Space Kid: The Lobster Tale

Publisher’s Synopsis: Freedom for lobsters! The second in the Eudora Space Kid series: a hilariously funny, early reader sci-fi chapter book perfect for elementary-aged kids. Can Eudora and her best friend, Arnold, rescue her favorite lobsters from becoming the next meal at the spaceship’s New Year’s buffet?

Eudora is a normal third-grader who just happens to live on a 36 deck AstroLiner. In SPACE! As a math and science whiz who’s been adopted by what you might call . . . aliens, she has normal ambitions—like being the chief engineer on an AstroLiner. But when her favorite lobsters on board appear on the menu at Chef Franklin’s dinner buffet, Eudora and her best friend, Arnold, hatch a plan to break them out. Will they save their crustacean friends? Or will they end up locked in the ship’s brig? Again . . .

When I reviewed the first Eudora book I said "it reads as a mashup of Junie B. Jones and Star Trek." I still think that is a good elevator pitch for the series. Eudora lives on the space ship Athena that is part of the Astro Fleet of the Planetary Republic. Her parents are part of the ship's crew and Eudora is a third grader who plans to be an awesome officer herself one day.  "The Republic is a group of twenty planets that work together to make the galaxy a better place for all living things, even dentists." Although Eudora has written to the president and asked that dentists be taken off the protected list (and that homework be added to the list of the Republic's enemies), so far those improvements have not been made.

Along with homework, dance class, and other everyday activities Eudora uses her STEM skills to reprogram the ship's computers to play a song about "Wiggle your booty on the dance floor" when a red alert is sounded. And she talks her friend Arnold into helping her free some of her father's lab specimens. As her mother says, "You say you want to be an officer, and you have all these great skills. I just wish you used them for good instead of all this silliness." The author's and illustrator's notes are written by their pets, which offers a unique glimpse into how they view their human families. There is also a word search for readers to enjoy. If you know children who like humorous stories about youngsters and outer space, then suggest Eudora Space Kid: The Lobster Tale to them.

David Horn lives in New Jersey with his wife, two daughters, and a funny dog named Trixie. He is a huge science fiction fan and loves reading science fiction books from both the old and new greats. His daughters inherited his love of science fiction and love watching sci-fi shows like Star Trek, Babylon 5, Stargate, and Star Wars. The Eudora Space Kid early reader chapter book series started as funny stories he told his daughters at dinner to get milk to come out of their noses. He hopes your children love Eudora’s silly antics in space too and milk comes out of their noses too!

The Fairview review is participating in the virtual tour in partnership with The Children’s Book Review and David Horn.
Posted by Suz Costner at 9:00 PM