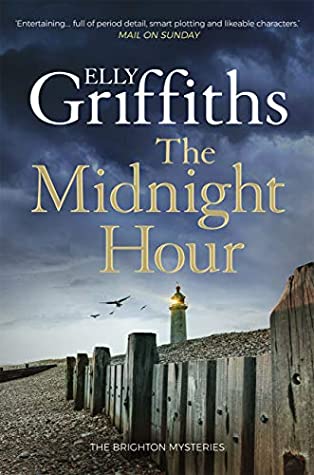 Perhaps you are already familiar with books by Elly Griffiths- the Ruth Galloway or the Harbinder Kaur series? If so, you know to expect plenty of clues, motives, and misdirection as the mystery is investigated. There are always several suspects, but as more details are uncovered they may point the finger at a different character than first seemed guilty. Elly's books also feature strong women who are in the thick of the investigation. This time there are two female friends who have opened their own private investigator office, as well as Detective Constable Meg Connolly. The PIs are hired by the wife of the deceased, which is a bit uncomfortable for the police superintendent since one of the investigators is his wife. What if the PIs solve the case before the police?
Since this mystery is also historical fiction (set in 1965), there are no cellphones or video conferences, and female constables are not even allowed to drive the squad car. When inquiries are made, they must be made in person, even if it means an overnight drive to track down possible suspects or witnesses who can give background information on the background of the victim. As the hunt spreads through Brighton and questions delve up dark secrets from the victim's past, the list of potential suspects seems to be growing rather than having possibilities eliminated. There are motives for nearly everyone who knew the deceased - lovers, employees, his own family. Who will work out the solution first?
Note - The Brighton Mysteries have at times also been called Stephens & Mephisto Mysteries or the Magic Men Mysteries.
I read an advance copy provided by the publisher for review purposes.
Posted by Suz Costner at 5:01 PM