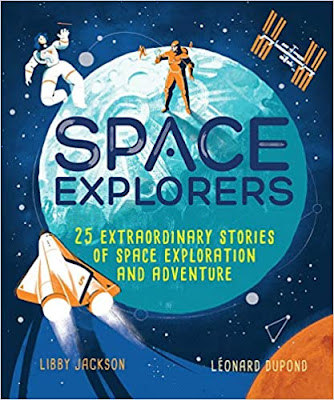 Gr. 3 - 7 Libby Jackson captures key moments in space exploration from the launch of Sputnik to plans for the first Mars mission. “These stories are not creations of imagination, no matter how unbelievable they may at first seem.”  Arranged chronologically, the stories include a variety of famous achievements and individuals. There are also discussions of astronaut selection and details about astronaut meals. A large scale illustration complements each story. The images capture the tension of the control room during Apollo 13, the humor of an astronaut chasing floating wasabi peas on the ISS, or the faces of all those who have died on missions. With its narrative approach, this volume could easily be used to introduce various topics in the classroom - from satellites to planetary expeditions. VERDICT: An enjoyable read for space enthusiasts and a helpful addition to library collections.