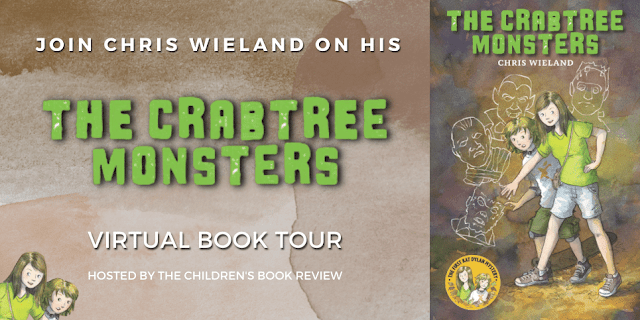 Enter for a chance to win a signed copy of The Crabtree Monsters and a $50 Barnes & Noble gift card!

A signed copy of The Crabtree Monsters and a $50 Barnes & Noble gift card.

A signed copy of The Crabtree Monsters.

Publisher’s Synopsis: Moving from Los Angeles to tiny Crabtree, Michigan, is the last thing thirteen-year-old Kat Dylan wants to do. Crabtree’s seen better days and isn’t what you call welcoming. Worse, the move means living with her gruff Grandpa Nick, the town’s police chief, and having to look after her little brother, Alec.

And that’s before Kat and Alec find themselves in the middle of a bank holdup by the Monster Gang—four robbers in monster masks. Before the heist is over, the kids lose their cash and Alec comes within a hair of losing his life. When it is all over, Grandpa Nick goes to jail, accused of being one of the robbers himself.

Suddenly, this boring little town isn’t so boring anymore. Kat’s determined to find out who the men are behind the masks, and she’s going to need help. But exposing the robbers could have big consequences. The deeper Kat goes, the more she learns life is about making choices, including some that are a matter of life and death.

Kat Dylan has a lot to be upset about. Her mother has been deployed to Afghanistan. Her father is a very busy homicide detective with irregular hours, so her mom decides that Kat and her brother Alec must go live with their grandfather. Now they are in a dinky little town in the Midwest instead of in LA. They have to go to new schools, make new friends, and try to get along with a curmudgeonly grandparent whose idea of breakfast is a plate of bacon and a glass of spicy V-8. To make matters even worse, the kids are at the bank when a robbery takes place. Not only are they scared to death, but their grandfather is accused of being the mastermind behind the robbery. With both parents out of reach and Grandpa behind bars, Kat and Alec decide to solve the case themselves rather than spend their time in foster care until they can be picked up by their mom or dad. Sound like more than the typical bad day an early teen might have? Homesick, lonesome for friends, parents not there to depend on, staying with a grandparent who is a virtual stranger, a smart-aleck younger brother who makes very bad jokes… And, as sometimes seems to be the way in life, everything Kat says or does seems to offend someone or make the situation worse. Part of it is typical teen mouthiness and not knowing when enough is enough. But another part of the problem is that the robbers are seen as Robin Hood-type good guys by most of the community, so Kat wanting to solve the case to clear her grandfather’s name ruffles a lot of feathers among those who don’t want the real robbers caught. Some days it just doesn’t seem to be worth getting out of bed, you know? If you know readers who enjoy mystery, danger, action, and perhaps a bit of a teenage crush as part of the story, then give them a copy of The Crabtree Monsters. This is especially good for those who appreciate a pro-active female protagonist. As Kat wonders, "Why do boys - cute or otherwise - always think girls need saving?" Then she goes out and takes charge.

Chris Wieland is an award-winning writer and filmmaker. He is also the father of two fierce children, including a tough, smart tween who helped him find the voice of his protagonist, Kat Dylan. He lives in Southern California with his family.

Virtual tour in partnership with The Children’s Book Review and Chris Wieland.