Interview with the Creators of Professor Astro Cat's Atomic Adventure 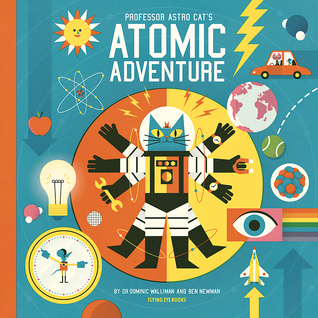 Dr. Dominic Walliman and Ben Newman, the author and illustrator of Professor Astro Cat's Atomic Adventure, were kind enough to let me interview them. Here are my questions and their amazing answers.

- First, let me say that I love the image of Astro Cat that looks like Vitruvian Man. And all the other illustrations are sure to capture the imagination and attention of young readers. Why did you decide to use a talking cat as your narrator for the books?

BEN: I drew a lot of cats as a child because everyone in my family had a cat when I was growing up. For some reason it has stuck with me throughout my time on Earth. About 10 years ago, a job came up to draw a cat in a space suit for a record logo. I’m not sure what happened but the client never used it and I never got paid for the work. Rather than let it go to waste, I sold the image as a print and once it had sold out I forgot about it until years later when I was stuck on a wrapping paper design for my publisher. I decide to re-work the character’s design and the wrapping paper design proved to be very popular. Around this time, Dominic suggested we should have a narrator for the 'Frontiers of Space' book we had just starting work on. I immediately suggested astro cat then we thought, how about a ‘professor astro cat’? Then we just ran with the idea and I’m so glad we did.

- The area of physics is full of complex ideas, but you have managed to state them in easily understood ways and then have illustrations that are full of humor as well as demonstrating the concepts. How long did it take you to work out the wording for the text?

DOM: I do my writing in my evenings and weekends, and so it takes rather a long time. I think that it took about a year and a half for us to get from the start to the final manuscript. As physics is my specialist subject, I started off with the explanations being a bit too complex, and so we had a lot of back and forth to refine the writing down to these elegant explanations. Ben is fantastic at reining me in and I have got better at working out ways of explaining things well and picking good examples.

BEN: Despite the distance between us (I live in the UK and Dominic lives in Canada), we work very closely on the Professor Astro Cat books. The writing remains fluid throughout the whole process so that it can be reappropriate it when I’m illustrating or the context changes. It is very important that we both remain open to new ideas and the way the project naturally evolves so although this might take some time, the results are well worth it.

- The examples you give use very familiar things like the number of atoms on the point of a pencil, or the molecules in a glass of water. Were these examples used when you studied these subjects in school, or did you have to think them all up yourselves? (I especially like the example of needing a push on the swings to demonstrate force and motion concepts. As an elementary school teacher I have given innumerable pushes at the swing-set.)

DOM: I think good examples are key to explaining things well because they are concrete and people can relate to them much better than the more abstract descriptions. This is especially true for children. So I always try and come up with examples that people can relate to and most of the examples are things that we came up with. However, I do have a stock of examples that I have picked up over the years that I think are great and I bring them out every so often.

- One of the most popular pages at my school would be the facts about flight. We study aerospace as part of our science program, and all my students have heard about the four forces of flight. Do either of you have a favorite practical application of physics?

DOM: The thing I love about physics is that it is so fundamental it literally underpins everything in the Universe. There is so much to choose from as just about all the technology we use today came from fundamental advances in our understanding of physics. But if I had to choose one thing, it would have to be the silicon transistor. This technology is the basis of all the computers, and smartphones and the whole internet - possibly the most revolutionary device ever created!

- Another point of interest would be the images of Astro Cat with Newton and Einstein. How did you decide which scientists/physicists to include in the illustrations?

BEN: I wish I had a clever answer for this but it is because we cover, in some detail, their areas of research so I thought it was fun to put them in. Having them interact with Prof Astro Cat is a nice way to get kids to connect with these scientists.

- You show and describe kinetic energy being delivered to villains by a super hero's judo chop. Who are your favorite super heroes? (Kids everywhere will want to know.)

DOM: I collected the Ultimate Spider-man comics when I was younger so I have a soft spot for the old web-slinger. I also really liked Judge Dredd when I was a teenager as the storylines are so brilliantly satirical.

BEN: I’m a big fan of American superhero comics. Daredevil is one of my all time favourites but I was obsessed with Batman and Spiderman as a kid. The comics I read as a child definitely help inspire me and point my moral compass in the right direction.

- Speaking of super heroes, quantum physics is actually mentioned in the movie "Ant Man." Do you think that the current interest in super heroes makes young readers more interested in scientific concepts, since they hear the characters using terms from the various fields of study?

DOM: I’m in two minds about the representation of science in the mainstream media. On the one hand I think it is great when concepts like quantum physics get out to a wider audience and I think science in general is permeating into popular culture more and more these days. This is fantastic for getting youngsters interested in science. However, I also see a lot of negative stereotypes being perpetuated, like socially awkward geeky scientists, or the costume for a scientist being a lab coat. I think there is still room for image of a scientist to be more positive and nuanced.

- You've taken on a "big" subject in Frontiers of Space, and now something as "small" as neutrinos and quarks in Atomic Adventure. What subjects do you envision Professor Astro Cat tackling next?

DOM: We are not quite ready to unveil our next ambitious project, however if I was to pick a single word to summarise it, it would be "complex".

- Your statement that a reader may be "the next person to help solve one of the great mysteries of the Universe" is a wonderful way to end the book. Is there anything else that you would like to share with readers?

DOM: This is absolutely true, the youngsters of today will be solving the worlds biggest questions in the future. One thing I would add is, don't be put off science by test scores or how you do in school. The most important thing is following your interests, and if you are fascinated by a subject just keep digging into it. Knowledge for its own sake is immensely rewarding, and who knows where it might lead, one day you might be the world's biggest expert!

Thank you again to Dom and Ben for taking the time to answer all my questions and satisfy my curiosity about their creative process and how they present scientific concepts in a really fun way. We will all be looking forward to discovering what their next "complex" project will be. In the meantime, don't forget to check out Professor Astro Cat's Frontiers of Space and Professor Astro Cat's Intergalactic Activity Book.
Posted by Suz Costner at 2:08 PM