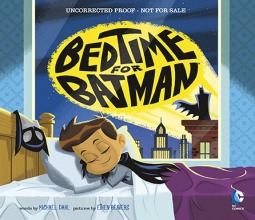 Have you ever seen the video updates that Michael Dahl makes for Capstone Books? If you have, then you won't be surprised at how well he captures the spirit of children and their imaginative abilities. In this story a boy is seen playing with his blocks in front of the TV in a suburban house as  night falls. Elsewhere, a square-shouldered man in a handsome suit looks at the city skyline from the windows of  his stately mansion. The scenes play out switching from one character to the other and back again, as they both prepare for the night. Normal bedtime routines take on new excitement as our young hero cleans things up, locks things away, and takes care of those who depend on him. Mirroring his actions, the man in his superhero suit rounds up criminals, helps out citizens, and takes care of his sidekicks. The last scenes of the boy asleep in bed and Batman swinging past his window tie it all neatly together.

Although Michael came up with the story line, we have to give props to illustrator Ethen Beavers. He creates so many points of similarity between the two characters that even the youngest readers will pick up on them. For example, the wall clock shows that it is bedtime just as the Bat Signal tells the hero it is time to head out into the city and the cartoon villains we see on the boy's TV just happen to be the same criminals that Batman faces that night. Little things will appeal to adult readers, like the phrase "And a dark night rises." It is obviously a play on the movie's title, but also an accurate description of the book's setting. Parents reading along with children may laugh out loud when the boy faces the open door of the bathroom and the text reads, "there is business to take care of."

Whether you are a fan of Batman, superheroes, or Michael Dahl's books, this heroic bedtime story is sure to please. Capstone's partnership with DC Comics sets the stage for many more little gems of this sort.

I read an e-book provided by the publisher through NetGalley.
Posted by Suz Costner at 6:17 PM