Summer Reading 2016 The Magician of Auschwitz 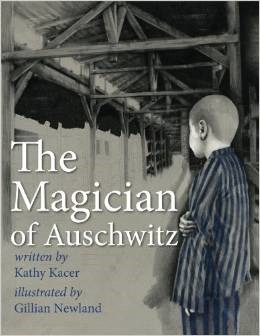 Books that introduce children to the terrible story of the concentration camps during World War II have a difficult task. How can they be truthful without frightening young readers? Which facts should be included for realism, or left out because they are too horrifying? Stories such as The Magician of Auschwitz somehow walk that fine line and help explain a difficult subject in a sensitive way.

This is the true story of a boy name Werner Reich and his bunkmate Herr Levin. In their lives before Auschwitz, Werner was a teen living with his mother and sister, while Herr Levin was a magician performing in the theaters of Berlin. They had never met before their time in the camp, but Werner valued the older man who was kind to him and never forgot the magic tricks Herr Levin was forced to perform by the guards. Even though they never met again after their time at Auschwitz, Werner never forgot his friend and maintained an interest in magic.

The story is short and told without any gory details or graphic descriptions of the camp's conditions. Basic facts such as the small rations and hard physical labor are mentioned, as well as the fact that if the guards had not been pleased by the magic tricks, then Herr Levin could have been killed. The illustrations are done in dark shadowy colors, with only the red on the playing cards standing out. The pictures reinforce the idea that the magic was the only bright spot in the lives of the prisoners.

The back matter includes black & white photos of Herr Levin and his wife, dressed as the Nivellis (their stage name), as well as Werner and his sister before the war, and one of Werner after his liberation. There are also color photos of Werner and his wife, a couple that show him doing a card trick, and one of Werner with the author. The final page gives a brief summary of the treatment of Jews in Hitler's Germany and a photo of children behind the fence of a concentration camp. Seeing those young faces behind the barbed wire and reading that more than 6 million Jews perished in the Holocaust, readers will realize how lucky Werner and Herr Levin were to survive.