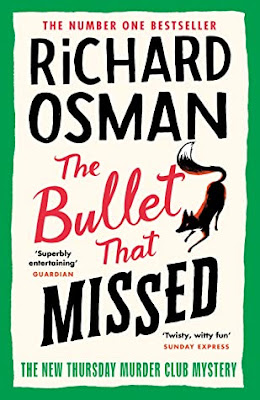 Things seem like they are settling down. Ibrahim has begun venturing into public again. Joyce has chosen a new cold case for the group to study. Elizabeth is reluctantly coming to terms with Stephen's dementia Bogdan and Donna are trying out the dating scene. Donna has gotten used to her mother and her partner Chris dating. But, of course, things can't stay this placid for long.
Ron begins dating someone they meet as part of the investigation into the cold case. Donna and Chris receive medals ( we won't tell anyone they had the help of the Thursday Murder Club to close the case). And Elizabeth and Stephen are kidnapped and threatened with death if Elizabeth won't assassinate someone. Really? Who chooses retired operatives living in a senior center to carry out their dirty work? And the cold case seems to still have some open leads to pursue.
Hold on tight as Osman takes us through chess games, kidnappings, antique shops, swimming pools suspended between skyscrapers (seriously), prisons, television studios, doctored tea, and several train stations. Your head will be spinning as the characters discuss cryptocurrency, VAT scams, investigative reporting, and relations between MI6 and the KGB. This is the club working several cases at once and still making their younger counterparts look as if they are moving in slow motion.
I read an advance copy provided by the publisher for review purposes.
Posted by Suz Costner at 2:22 PM