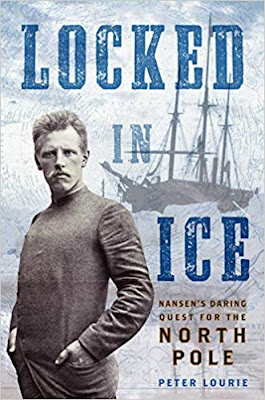 Fridtjof Nansen had a crazy idea. Everyone said so. He wanted to purposely get a ship locked in the pack ice that surrounds the North Pole and let it drift with the currents to see if it could reach the Pole. Despite naysayers, he found a shipwright who designed a ship with modifications that were meant to keep it from being crushed by the ice. Nansen also convinced the government of Norway to fund his expedition. He and the crew set off with enough supplies to last for 5 years, with none of them sure if they would ever see home again.

This biography tells of Nansen's earlier expeditions, those that gave him the credibility to get a polar voyage funded and staffed. Then it traces the voyage of the Fram and her crew from their home port through their time trapped in the ice, to Nansen's departure from the ship to cross the ice by dogsled, and the end of both those journeys. Plentiful archival photos of the expedition (and drawings inspired by the photos), fill the pages. There are descriptions of each crew member and his responsibilities, the various supplies, and the special equipment used by Nansen and his crew, all of which are supplemented in the back matter.

For those who enjoy tales of survival and exploration, this contains a wealth of information. It is intended for grades 7 - 10, but even adult readers would find it fascinating.

-- On a personal note, the fate of the sled dogs during that final dash for the Pole is not a happy one. The author makes a point of mentioning several times that it was a different era then and that the men "loved their dogs and treated them well when they were traveling, but if one grew too weak to pull, it became food to keep the other dogs alive...Survival depended on a dog's ability to pull." Dog lovers will not enjoy those portions of the narrative, but will appreciate the section in the after matter about how modern expeditions do things differently.