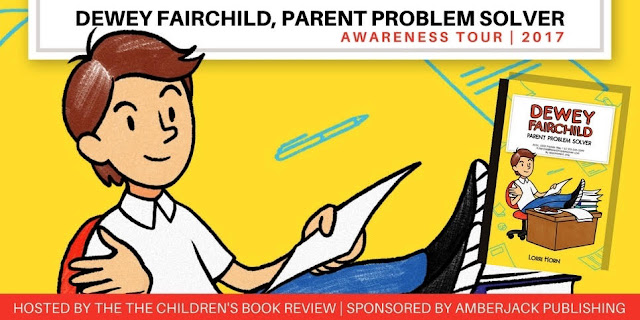 
Publisher’s Synopsis: Dewey Fairchild isn’t just good with parents, he’s great with them. He’s so good at handling parents that he’s built a thriving business out of it. He even has a secretary, Clara―a great alibi and an even better baker. Dewey settles the most troublesome of cases, from an overprotective mom who won’t let her child go to class on her own, to a dad who can’t stop picking his nose any chance he gets!
Dewey has no problem handling other people’s parents, but when he overhears his parents talking one day, he faces a challenge he never expected. Dewey can solve any problem parents may cause, but what will he do when the parents who are causing problems are his own?

About the Author: Lorri Horn is an educator and an author. She has a degree in English, a teaching credential, has been Nationally Board Certified, and has taught pubic school for over 14 years. She loves cheese (and wants it to be its own food group, which made working on a vegan book a challenge), humor, baking, books, and spending time with her family. Lorri’s background as a career schoolteacher and instructional leader make her especially sympathetic to the needs and perspectives of children, and this sensitivity features in her work as an author. Lorri blogs on her website, lorrihorn.com. Her work has appeared in The Los Angeles Times, The Huffington Post, Phi Delta Kappan, The College Board and Mayim’s Vegan Table. Lorri lives in California with her husband, son, and their dog, Wolfie.
About the Illustrator: Agnieszka Grochalska is an illustrator living and working in Warsaw, Poland. As a child she wanted to be an astronaut or a jet pilot. Eventually she changed her mind and dedicated her keen eye and steady hand to drawing precise and detailed compositions reminiscent of classical storybook illustrations.
She received a MFA in Graphic Arts in 2014, exploring traditional painting, printmaking, and sculpting along the way. Currently she works predominantly in digital medium, striving to make it look as natural as her works drawn traditionally. Her illustrative works were featured in group exhibitions both in Poland and abroad.
Agnieszka enjoys travel and cultural exchange with people from around the world, referencing those experiences in her works alongside the Slavic folklore of her homeland. When she isn’t drawing or traveling, you can find her exploring the worlds of fiction in books and story-driven games.
Agnieszka’s works can be viewed in her online portfolio at agroshka.com.

MY REVIEW:
Imagine a cross between Encyclopedia Brown and Mrs. Piggle-Wiggle. That's right, a young boy with detective abilities who also happens to be good at "curing" problem parents. Dewey handles issues ranging from germaphobic mothers to fathers that belch (and worse) in public. With the help of his secretary Clara and her dog Wolfgang von Fluff Bucket, young Mr. Fairchild finds cures for overprotective mothers, fathers who won't stop playing pranks, and other dilemmas brought to him by kids from all over town. Sometimes he even enlists the assistance of his friends in gathering information or find the right approach for clients to break their parents of all these bad habits. As he puts it, "Desperate mothers called for desperate measures."

Each situation is handled successfully and readers will be amused by the solutions to the problems. Scenes like the joker dad sucking his thumb in shock over being pranked himself will have readers laughing out loud. But what will really win everyone over is the fact that Dewey has a parent problem of his own and doesn't know how to solve it. It proves that no one is perfect and that we can all use some help from our friends. Seraphina and Colin's attempts at undercover work in the dental office of Dewey's father are hilarious and show how far true friends will go to help each other.

This book is appealing on many levels. There are the funny parent problems and the even funnier things Dewey has the kids do to break those parental habits. Readers who like secret hideouts or clubhouses will love Dewey's office and the way clients enter and exit. For those who enjoy spies and detectives, there are the stakeouts, message drops, and using Wolfie to smuggle tape recorders. And there is plenty of word play and puns. Looking over the file of the burping father, Dewey finds that he also picks his nose in public, and "had to admit, having a public nose picker for a father pretty much nosed ahead of other people's problems." He tells his secretary, "Get it, Clara!? I'm picking her case first!" Go ahead and groan, but it is funny. 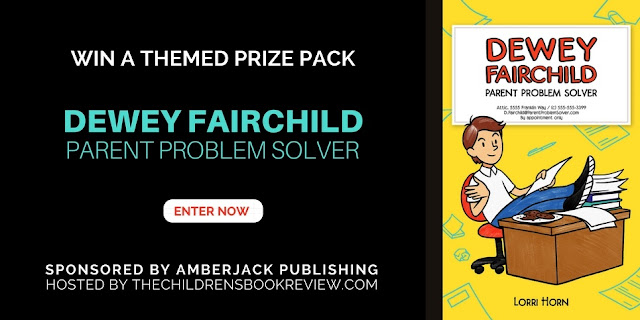 I am participating in this blog tour in partnership with The Children’s Book Review and Amberjack Publishing.
Posted by Suz Costner at 8:14 PM