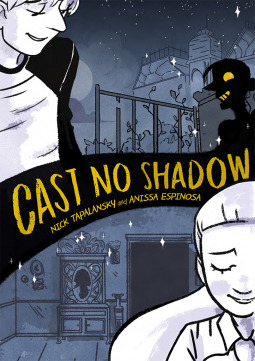 So, combine one boy born without a shadow, one lonely girl who happens to be a ghost, and what do you get? A love story? Yeah, that's part of it. It's not surprising that they would be attracted; they are both outsiders of a sort and they share similar stories of a mother dying young and unexpectedly, a father finding a new companion after his grief, and how difficult it can be to let someone else into a family. But Greg also has his friend Layla, her new boyfriend Jake (that Greg can't stand), and the antics of Jake's father - who became mayor of their town after Greg's mother died. There is a lot of anger and frustration building up inside this boy, and when it breaks loose, the town is in for a wild ride. Can Greg, Eleanor (the ghost), Layla, Jake (the new boyfriend), and the town's soothsayer really figure out a way to put everything right?

Tapalansky and Espinosa have created an amusing story that also manages to touch on grief, change, growing up, and letting go. Not that the story is a downer, far from it. What story containing the world's biggest hairball, the world's biggest collection of souvenir spoons, and a psychic singalong be a downer? Great for readers who like some spookiness and action mixed in with their star-crossed lovers.

I received a copy of the book from the publisher for review purposes.
Posted by Suz Costner at 12:47 PM