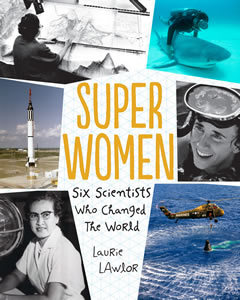 I am very impressed by all six of the women included in this book. I had heard of Eugenie Clark and Katherine Johnson, but the others were to me. Each of these women had to work around the system that would have kept them from their chosen careers due to their gender, and sometimes their race, too. If you are someone who gets frustrated by stories of inequity and prejudice, then you may need to do some deep breathing while you read Super Women. Eugenie Clark was held for questioning by the FBI due to her Japanese ancestry and lost her place on a research trip to the Philippines because of it. Katherine Johnson and other African American computers had to eat in a segregated dining room at NACA. Gertrude Elion's applications to graduate school were turned down because she was a woman. Marie Tharp wasn't even allowed on ocean research vessels because she was female. Margaret  Burbidge had to pretend to be her husband's research assistant to get access to Mount Wilson Observatory (although she wasn't allowed to use the restroom while she was there). And Florence Hawley Ellis had to fight against the belief that archaeology was men's work and too hot and dirty for women.

It's hard to imagine how they managed to keep their composure and accomplish all they did despite all the obstacles that were placed in their paths. Author Laurie Lawlor details the route that each woman took to make their incredible contribution to science - in drug research, zoology, research mathematics, astronomy, archaeology, and cartography. Quotes from the women, archival photos, and other background information bring their careers and personalities to life for readers. Back matter includes a glossary, source notes, index, and photo credits. A welcome addition to biographies of famous scientists.

I received a review copy from the publisher.
Posted by Suz Costner at 3:08 PM