Fall Reading 2018 Answering the Cry for Freedom: Stories of African Americans and the American Revolution 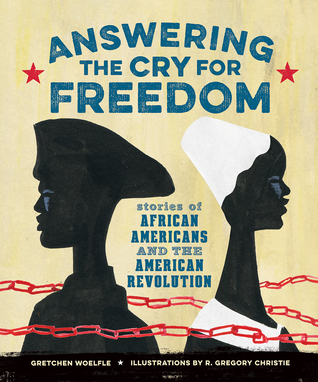 Many students might be surprised to learn that African Americans played roles on both sides of the American Revolution, sometimes even playing the part of double-agent. This collection of stories shares the experiences of 13 such individuals during those early years of our nation's founding. While some readers may have heard of Phillis Wheatley or Sally Hemings, many of the others will be newly discovered characters in U.S. history.

This is a good introductory collection for social studies units on the time period, or for those who are looking for more information than the usual details covered in a textbook. I would also suggest pairing this with some of the picture book biographies available such as:
- Mumbet's Declaration of Independence by Gretchen Woelfle,
- A Spy Called James: The True Story of James Armistead Lafayette, Revolutionary War Double Agent by Anne F. Rockwell, or
- Phillis Sings Out Freedom: The Story of George Washington and Phillis Wheatley by Ann Malaspina and Susan Keeler.

I love the illustrations by R. Gregory Christie and the way Gretchen Woelfle incorporates quotes from the individuals whenever possible. As Agrippa Hull said, "It is not the cover of the book, but what the book contains [that] is the question. Many a good book has dark covers." Back matter in this particular book includes helpful timelines for the lives of each individual, a selected bibliography of books and websites, source notes, and an index.

A very helpful addition to elementary school library or classroom collections or grade levels studying the period of the American Revolution.
Posted by Suz Costner at 5:37 PM