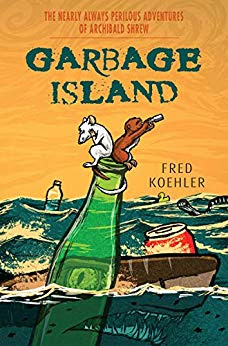 Imagine "The Odd Couple" with one member an inventive shrew who just can't control himself when he gets an idea, and the other half of the pair a mouse who runs their community and longs for peace and order. Now, take those two tiny creatures (Archibald and Mr. Popli), and locate them with the rest of their neighbors in the middle of the Great Pacific Garbage Patch. So we have a seagoing survival story, mixed in with the various personalities, the clever inventions that keep the community alive as it drifts in the ocean, and all the perils you can think of. I'm not kidding. All. The. Perils. There are sharks, snakes, spiders, starvation ... has anyone else noticed there are a lot of words that begin with "s" in that list? While we're at it we should probably add stubbornness as a danger factor. (Once you read it, you'll see what I mean.) Come along on this disaster at sea/buddy story and root for the survival and success (at last some positive "s" words) of Archibald and Mr. Popli.

This is a book that would be great for a class or family read-aloud, with plenty of cliffhangers to keep everyone anxious for the next reading session. It could also spawn some great STEAM/makerspace time as readers try to top the amazing inventions that Archibald cobbles together from bits of trash that float by. And looking at how the community cooperates rather than eating each other as some of the animals would do in their natural environment, as well as curiosity about the garbage patch itself, could lead to some independent research. Perfect for readers who enjoy animal based fantasy like The Tale of Despereaux or The Rats of NIMH, and other pint-sized heroes.