Fall Reading 2018 When Spring Comes to the DMZ 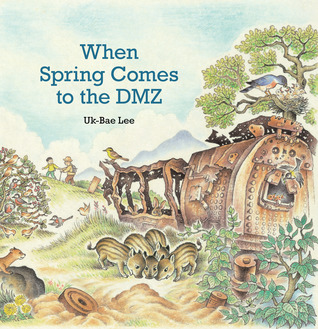 The beautiful paintings in this book show the variety of wildlife that has made the DMZ into a place of abundant animal life. Scenes from the changing seasons of the year include salmon swimming upstream to spawn, mountain goats clambering over rocks, and water deer and otters in the river. But readers can also see the fences and troops on each side of the zone, and the rusted pieces of equipment and weapons left behind from the Korean War. A grandfather climbs to the observatory and looks out over the land again and again, then dreams of throwing open the gates and going inside.

The juxtaposition of the animals and their families with the fact that the area is only safe for them because humans from both sides are forbidden to cross is very poignant. Some might see it as something positive coming from that military conflict, but others might sympathize with the grandfather in the story and wish that animals and humans could both exist peacefully in that area without the fences and guards.

This would be useful for comparing/contrasting the types of animals shown in the book with animals from other habitats, or as a followup to a unit on the Korean War. I read an e-book provided by the publisher through NetGalley.
Posted by Suz Costner at 2:25 PM