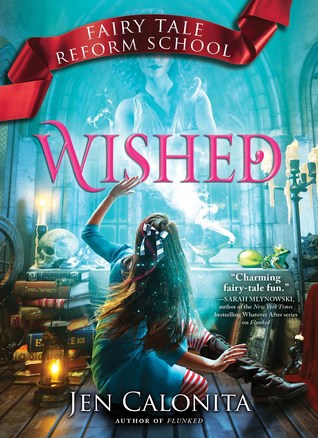 Be careful what you wish for. Everyone has heard that saying, right? Well, evidently Maxine has not - or else she didn't believe it. When she gets the chance to make a magical wish, she wishes for everyone at FTRS to be happy. Suddenly classes are cancelled or postponed, Harlow and Jocelyn are wearing bright colors, the halls are filled with glitter and confetti, and there is a school musical in the works. What about Stiltskin? That's what Gilly wants to know, but none of her friends have time to worry about villains when they are busy practicing for their big performance.

Imagine mermaids doing synchronized dancing and toting waterproof scripts, pixies styling everyone's hair with color and glitter, and Maxine singing a solo! But there are still things happening in the kingdom of Enchantasia that should be causing the teachers to worry. Crops are disappearing or being covered with a strange goo. The weather has gone wild with rain and lightning occurring unexpectedly. And the chief of police suddenly decides to take a vacation. Will things ever get back to normal? Or will the school stay in an enchanted state of happiness forever?

This is a funny break in the action for most of Gilly's friends as they work on sets, costumes, and learning their lines rather than practicing spells and martial arts. Gilly still wants to find Alva and Stiltskin, and she also has a new desire to learn more about her family history after a letter from her mother mentions the grandmother that she has never seen. All the usual characters are present, even though they are not acting in their normal fashion (except Maxine's duck, Peaches, who is still eating all sorts of odd items).

Fairy Tale Reform School fans will laugh out loud at Gilly's growing frustration with everyone's musical preoccupation and the various ways the wish for happiness plays out at the school. I read an e-book provided by the publisher through edelweiss.
Posted by Suz Costner at 12:47 PM